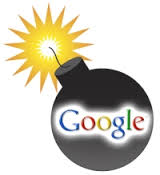 A Google bomb or Google bombing refers to the act of manipulating the ranking of a web pages search engine results and connecting them with irrelevant terms. This acts as a counter-effect measure to Google’s search engine optimization (SEO) results which filters and improves the search engines related results.

Google Bombing was first noted in 1999 when Microsoft’s top results were connected to the search term “more evil than Satan himself”. However, the term “Google Bombing” wasn’t introduced until April 6, 2001 by online magazine journalist Adam Mathes. He noticed that when search engine queries returned with unrelated results, those page rankings increased even if that query was in no way actually associated with the page.

The reason for Google bombing is not always know but more often than not is for political issues, slander of a person or company or simply as a fun competition. Many believe that this is just amusement for pranksters and hacks, however, most of the time it’s a ploy for some small-time site owners trying to undertake their competition(s). Google bombing in this manner might seem harmless, but billion dollar companies have been know to turn to this practice. Companies who initiate the practice of Google bombing are open to legal actions because not only do they alter search engine results, they also cost Google money.

Spammers employ this tactic by creating several blog accounts with fake names to increase their listing on Google.

In 2005, “Old Rice and Monkey Nuts” was used to send people to the website of Andrew Bolt, a Herald Sun columnist, only to boost his “hits” on his page. The phrase references the belief that commodities trader, Tirath Khemlani, was involved in brokering $4 billion loan deals to Austrailia in 1974. This Google bomb has since been taken down.

Political enthusiasts can turn the table in their favor and harm or embellish one’s stature.

Lying Sack of Shit brings forth the web page of Australian Federal Attorney-General Phillip Ruddock. Many Australian bloggers banded together to protest against his slander of Mamdouh Habib. This too has been removed from the search engine results.

Some Google Bombs are strictly just to be funny.

The Chuck Norris Google bomb is probably one of the most popular. If a user typed in “Find Chuck Norris”, instead of a query list, you received the message “Google won’t search for Chuck Norris because it knows you don’t find Chuck Norris, he finds you”. Though this query result might have been taken down but the humor still reflects today.

Similar to the Chuck Norris joke, if a user typed in the ‘french military victories’” the search loaded “Did you mean: french military defeats”, and no other options.